Get the latest creative news from FooBar about art, design and business.

Online image editing is one of the most convenient ways of editing photos. Still, many online applications lack in providing users with a wide range of options, both in terms of editing tools and extra features. There are only a few online photo editing applications that offer great performance as well as ease of use and VanceAI is definitely one of them. With the Productivity series, VanceAI offers users a wide range of tools that are capable of editing and enhancing images drastically while making everything very simple for the users. Desktop software applications can often take much time, which is not always suitable for the hectic workload of many professionals. Graphic designers and editors working on multiple projects or with multiple clients can benefit greatly from VanceAI due to its quick processing speeds.

Other than that, it is also beneficial in terms of resources. You can buy a VanceAI subscription for as low as $4.95, which is much less than many other online and desktop-based photo editing software applications. The Productivity series comes with twelve image editing tools, which include highly used tools such as background remover, image sharpener, image upscaler, and more. Considering all of these tools are powered by AI technology, users must do the bare minimum to get good looking images. Not to mention that the images are processed within a few seconds only. 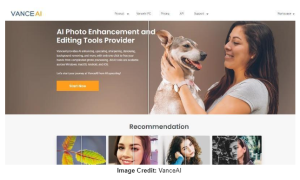 VanceAI focuses amply on AI based algorithms for its tools and performance. The platform has a collection of more than fifteen image editing tools, with all of them containing AI based algorithms and other features. When it comes to using VanceAI tools, most of it comes down to uploading images and waiting for a few seconds. The interesting addition to many VanceAI tools is that even though they are automatic tools, they still offer some effective preference settings that change the way the final image will be processed. Besides the AI based tools, VanceAI also offers features that automate the way you edit photos. For instance, the Workflow feature allows users to queue up multiple tools one by one. Once you run the queue, the tools will work on the image and provide the result within a few seconds. So, you could use the background remover along with the image upscaler to increase image resolutions while removing its background in the process.

The same feature has not yet made it to VanceAI PC but the software still benefits from VanceAI’s minimalistic UI design and more. Given that the overall product is recent, users can anticipate the application to grow in multiple verticals.

VanceAI Productivity Series – Review of the Tools, Features, and More

The following is a dive into six of the twelve tools provided by the Productivity series.

Image blurs can be a massive problem for your photos and it is sometimes difficult to ascertain the cause of it. An excessive amount of image blur can completely cover up the entire image or at least the focus point. A moderate or controlled amount of image blur can also be beneficial in giving the photo a certain kind of look. With VanceAI Image Sharpener, you can level image blur quite easily. The tool also gives you options that let you choose the type of blur that you want to reduce or control. The options are motion, soft, and lens blur. Other than that, you can also choose the general option, which is the basic image blur reduction option that goes with everything. Apart from that, you can also adjust the sharpness level preferred for the final image in the Workspace.

The details in the After image have way more visibility than in the Before image, with the primary reason behind it being the lack of image blur. The Image Sharpener does not really reduce the blur in other parts of the image, which can be both good and bad. However, the areas where it does focus, it manages to clear image blur by a huge margin. Due to the lack of image blur, we can also see the color tone of the original image in a better light. The colors appear much more authentic and lively in the After image.

VanceAI Image Enhancer can upgrade the quality of images in an instant using its AI based algorithms. It can also serve as a tool to enhance images quickly after the main editing is done. What makes the Image Enhancer moderately different from other tools is that it can enhance image quality without the need for upscaling. The Image Enhancer and Upscaler share the same Workspace and in order to initiate the Image Enhancer, you simply have to set the upscaling to “1x”. Other than that, you can choose from these options of standard, anime, text, and art. By hovering over any option, you will see how they work but in basic terms, choose the option that represents your image the most.

Users can definitely spot the difference in quality in two areas at least. The first is the text on the door. While the Before image looks a bit blurry, the After image sharpens the text completely and as a result, the number appears sharper and so does the color of it. Next, when you divert your attention to the bottom of the image, you will see that the overall image looks like it has smoother textures than the old image.

VanceAI Image Denoiser is the anti-image noise tool from VanceAI. With this tool, you can get rid of image noise or at least reduce it to an acceptable volume. Similar to image blur, image noise can also be a source of visually appealing photos. With that considered, the tool offers users the slide tool to set the amount of sharpness and image noise they want in the final image beforehand. When set to max, the tool will attempt to get rid of as much image noise as possible and it can definitely lead to images looking clean. Also, since it is an AI based tool, the processing does not take much time either.

The Image Denoiser removes a significant portion of image noise from the image, as we can see clearly from the example image shown above. The lack of image noise makes an image look pretty different from what it did before. Moreover, the depth of the design is better portrayed in images that lack image noise.

VanceAI Image Upscaler is similar to the Image Enhancer. The two tools also have the same Workspace, as mentioned before. In order to upscale an image, you can choose from the “2x” option to the “8x” option in the Workspace. These numbers indicate the amount of upscaling that the image will go through. You can easily create 4k versions of your images by upscaling them accordingly. The AI Image Upscaler tool is really effective and will enhance the quality of your image along with its resolutions. You can have high quality 4k images and use them as wallpapers and banners on websites, social media, and other platforms online. You can upscale travel photos, anime type wallpapers, and more with this tool easily.

The Image Upscaler manages to upscale the image two times the size of the original in this case, as instructed in the Workspace. Additionally, the tool also enhances the color tone of the image pretty well along with the text on the product. There is also a difference in the quality of the background with the After image looking superior in pretty much every aspect.

BGremover from VanceAI is a background remover tool online that can help users in multiple ways in editing images. With the help of its AI based algorithms, BGremover can offer results fairly quickly and easily, which can be a big help to many users as removing background from an image can become complicated at times.

When using the tool, you can choose from the options of Human or Object, which basically prompts the tool to maintain either of those while processing the image. After that, users can edit the image further by using the Brush tool to remove elements of the image further if they want. Apart from that, users can also click on Change Background to replace the empty background with a better one. It is also possible to upload your own background for replacement.

The result here is pretty good and you can now use the After image for further editing easily. By clicking on the Change Background option, you will see plenty of solid-colored backgrounds and scenic background options for your image.

Portrait images make for an important part of many users’ profiles. They can be a perfect glimpse into the rest of the bio or profile that we have online and this not only goes for personal bios but also for work and career related ones. VanceAI Portrait Retoucher can be a highly useful tool to have. On the VanceAI Portrait Retoucher workspace, you can either choose the option for removing acne and other similar features from the photo or you can simply enhance the photo as it is. Or, you could simply try out both options one after the other on the same image and check the results.

The example image here was enhanced with the Enhance option chosen in the Workspace. From one look, the effect of Portrait Retoucher is clear. The After image looks more outlined and sharper with each facial detail having a deeper color than before. All of these effects together make the image have a striking appearance. The best part is that it improves the finer details of the image even more.

VanceAI is an affordable application overall. In order to get free image credits, you can go to the application’s homepage and sign up for an account. Once your account is created, you will start getting 3 image credits per month for free.

VanceAI offers alternatives that work like demo versions of the original tools from VanceAI. These alternatives are free to use but are a very simplistic version of the tools on the official platform. However, they can still offer decent results. You can head over to photoenhancer.ai for upgrading image quality without upscaling. If you want upscaling as well, you can instead use image-upscaler.com. You can also use more creative tools including VanceAI Photo Restorer to repair old damaged photos. Apart from the photo editing options, VanceAI also provides a PDF processing tool online which is completely free to use. Click on VancePDF.com to access it.

VanceAI Productivity series is an extremely useful tool to have regardless of your experience with photo editing. When it comes to tasks such as image upscaling, enhancing the quality of images, removing backgrounds, and more, it is best to do it through an AI based application that can offer satisfactory results and that is what VanceAI is able to provide. In fact, VanceAI excels because of the extra features as well like VanceAI Art Generator. Use your imagination, it even can draw a sports car moving on the street. The UI design and overall accessibility of VanceAI places it among the best online based photo editing applications. They recently launched VanceAI JA, allowing users to use the website in Japanese, and you can expect more updates later on too. You can first try out the $4.95 subscription and go upwards depending on requirements.